All you need to know about pearls

Here we have compiled some information which should be dedicated to the "Tears of the Gods". For over 4000 years pearls have lost nothing of their mysterious fascination and captivating beauty.

Pearls are the oldest kind of jewellery we know. Even in ancient times, for example in the Roman Empire, only crowned heads were allowed to wear high-quality pearl jewellery. Pearls were such a high status symbol that the "normal people" were even forbidden by law to wear pearls.

They bring happiness to the Hindu, prosperity to the Arab, recovery to the Chinese, and love to the Egyptian. But most people are simply enraptured by the beauty of pearls. Here nature shows itself in its highest perfection. 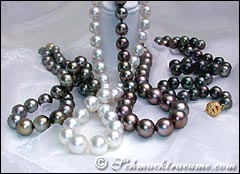 The pearl was and is the darling of all peoples, and in its esteem the most exquisite gemstones often do not equal it to this day. Innumerable variations as well as the constant differences between one and the other pearl make pearls one of the preferred speculative objects and jewels of all first quality for their lovers even on today's market. Even today we find the finest pearls in the crown jewels of all royal houses.

It was not until 1916 that the father of pearl breeding, the Japanese K. Mikimoto (1858 - 1954), succeeded in offering the first cultured pearl at the Paris Jewellery Exchange after innumerable attempts lasting many years. With this he laid the foundation for Japanese pearl farming.

In order to be able to start growing pearls at all, you need oysters that are big enough to hold a pearl seed.

In the case of South Sea mussels (pinctada maxima) and Tahitian mussels (pinctada margaritifera), the minimum age for planting a seed is three years. All other mussels, such as the Japanese Akoya mussel or the Chinese freshwater mussel, need only two years.

The term "pearl", or "real pearl" or "orient pearl" may only be used for naturally found pearls. All other pearls are cultured pearls.

Pearl oysters live on the seabed and feed on plankton, which flushes the current into their interior. If this plankton contains something that the oyster cannot digest, e.g. a grain of sand, the oyster will defend itself against this intruder and isolate this foreign body. Layers of mother-of-pearl are laid around this grain of sand - and a pearl is born, layer by layer around this intruder over the years.

Cultured pearls are produced in the same way. Here we help the coincidence a little: By human hand, the oyster is being inserted a foreign body, the so-called mother-of-pearl core.

Before planting, the oyster is dipped in antibiotics to reduce the risk of infection. Planting the seeds is a highly specialized profession, which is carried out almost exclusively by Japanese people all over the world. The entire result of pearl breeding depends on the correct planting technique.

The pearl shell is opened a small gap and the kernel is implanted. The mussels are then sunk into nets in the sea. Cultured pearls are subject to the same protracted growth process lasting several years as naturally grown pearls.

The work of pearl farmers now consists of checking the temperature and quality of the water on a daily basis. The nets are positioned in such a way that the mussels always find ideal growing conditions. One of the biggest difficulties in pearl farming is the quality of the sea. French Polynesia (Tahitian pearls) and Northwest Australia (South Sea pearls) are ideal breeding areas here.

The pearl breeding area of French Polynesia has an extension of approximately four million square kilometres. Only about 200,000 inhabitants live in this area. In Australia, pearl farming areas with excellent water quality are about 2000 kilometres from the nearest major city. 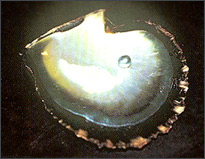 After three months it is checked whether the oyster has retained the seed or not. In French Polynesia, after the first implantation, the oysters are hung in special nets in the sea, which are so finely meshed that the core remains in the net. In Australia, oysters are x-rayed after three months. If an oyster has rejected the seed, either a new seed is implanted or the oyster is returned to the sea. Because there is a very high probability that the oyster will also eject the second seed.

The mussels are taken out of the water at regular intervals. Then they are cleaned and freed from seaweed. The shells are treated to protect them from parasites.

Only 40% of planted oysters produce a pearl at all, of which only 2.5% are round pearls of AAA quality. 10% are round pearls of inferior quality, about 10% are almost round pearls, 25% are drops, buttons, oval and semi-baroque pearls. 30% of the harvest are small pearls, 10% baroque and about 15% are of absolutely inferior/unsellable quality!

Only after years of painstaking care, i.e. after the mussel has survived all natural dangers and has covered the core with up to a thousand fine layers of aragonite, a beautiful pearl is harvested. This also explains the high value of flawless pearls.

In the South Sea waters of Burma, Indonesia and Australia lives the silver-lipped pearl oyster, in which the most expensive and coveted of all cultured pearls is produced: the South Sea pearl. The main focus of breeding is on the north coast of Australia, hence the name Austral cultured pearl. This dreamlike pearl is mainly grown in sizes from ten millimeters and captivates with its unique colors. Brilliant silver-white, white-pink, cream-white up to the rarest gold tones. 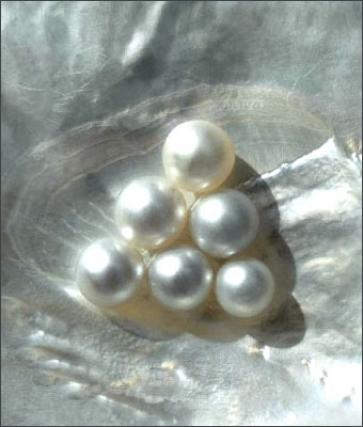 All over the world the South Sea pearl has the important nickname "Queen of pearls". It is characterized by size and rarity - its beauty is outstanding.

Its diameter begins where the Japanese Akoya pearl ends. It ranges from 9 mm to 18 mm for the South Sea pearls, in rare cases even more. The reason for this is the use of the much larger oyster species "Pinctada Maxima". It is extremely difficult to find pairs of South Sea pearls (two identical pearls) and, if successful, this is naturally reflected in the price.

Since it is very difficult to find the right number of pearls of the same size, shape, colour and lustre in spite of the relatively low yield of many farms, hardly any "chokers" are put together, but "gradient cords" ("necklaces" with strong middle pearls, tapering towards the end). It is therefore still almost impossible or extremely time-consuming to produce a South Sea pearl necklace, for example, in which all pearls are the same. Such a chain would then be unaffordable.

The Australian South Sea pearls are and remain the most precious, but also the most expensive pearls worldwide and their prices are a good 50% above the prices of their "dark sisters", the Tahitian cultured pearls. 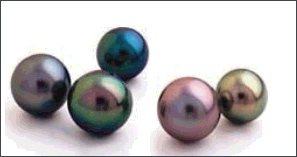 Tahitian pearls are cultured pearls of the black-lipped "Pinctada Margaritifera". Apart from a few breeding attempts in Mexico, this pearl is only bred in French Polynesia. Its size ranges from 8 mm to 19 mm. Tahitian pearls have a very wide color spectrum. The most common color is anthracite with various shades. The most expensive/requested is the iridescent peacock-colour, which shimmers in all rainbow colours. Then comes the intense green-black, followed by grey tones.

Strictly speaking, Tahitian pearls are of course also South Sea pearls, as their home is also in the South Seas. 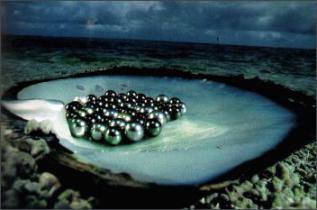 The Pinctada Margaritifera is the most versatile oyster in terms of colour. The colour of the pearl cannot be influenced and seems to depend only on the single mussel. There is no evidence that certain colours occur more frequently in certain lagoons or at certain water temperatures. The pearl colour is therefore never "programmable" by humans.

Akoya pearls are the classic Japanese, Chinese or Korean cultured pearls of the "Pinctada Martensi" and "Pinctada Fucata". Unlike the South Sea pearls or Tahitian pearls, the coating duration can vary here. Usually the pearls are in the shell for one or two years. The Akoya pearl oysters are much less mother-of-pearl than the South Sea or Tahiti oysters. The coating of the mother-of-pearl core of Akoya pearls is therefore much thinner. 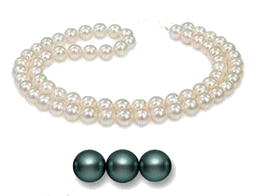 The raw pearl is often a little greyer, cream-coloured, sometimes even greenish-grey. The pearls are first drilled, then bleached and dyed. Finally they are polished.

Mabe pearls are not produced in the gonads of oysters, but between the mantle tissue and the oyster shell.

The oyster is implanted with plastic cores. The kernels can be round, drop, oval or heart shaped. The oyster then forms mother-of-pearl around the kernel. 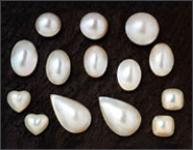 During the harvest the oyster is opened, then the Mabe beads are punched out. The plastic core is removed (usually melted or burnt) and the cavity filled with mother-of-pearl. For South Sea or Tahitian oysters, Mabe pearls are usually used as the last operation, for example when the oyster is already too old to produce high-quality round pearls.

With this information we hope to have brought you a little closer to the history of pearls. Perhaps you will also understand why we have specialized almost exclusively in South Sea and Tahitian pearls, and here only in the highest quality among them, within the framework of our large selection of exclusive pearl jewelry pieces. They are and remain the noblest and most coveted pearls worldwide - even more: With AAA quality, they stand up to comparison with no other pearl in terms of size, lustre and charisma.